Time for my first official food post! And even better, it’s something I made!

As of two weeks ago, I finally learned how to make a grilled cheese sandwich. And ever since then, I have probably consumed about a hundred of them. I had this weird ability to cook anything and everything, BUT a grilled cheese. Yeah, I don’t get it either. It also didn’t take until college for me to perfect a sunny side up egg… Which I am so good at making now that I can make it with my eyes closed. I’ll post up a video of me doing that later haha.

So I’ve been so addicted to grilled cheese sandwiches that I’ve been making tons of different versions of it. When I told a friend about what I was doing, he pretty much told me that I wasn’t making grilled cheeses anymore. I don’t care what he says because it’ll still be a grilled cheese to me… Just with something extra. 🙂

And so time for my first official food post!… Cheesy egg in a basket with kale sandwich! 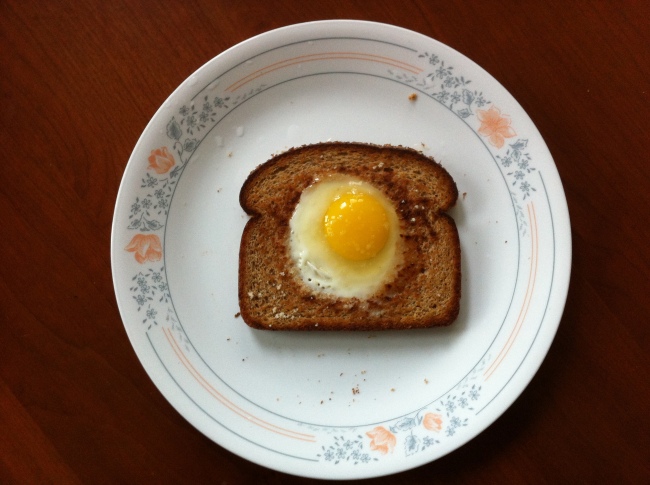 I pretty much combined the idea of a grilled cheese and an egg in a basket, which is sliced bread with a hole and an egg in it. Then I added some sautéed kale because I love vegetables of course! Here is the recipe because I already know your mouth is watering:

First, heat some butter in a pan on medium. Then you’re going to grab a slice of bread and cut a hole in it. You can use anything that’s a circle (duh) such as a jar. I use the plastic cups used for measuring rice. Place that holey slice onto the pan and switch to a low heat. After it has browned a little on one side, remove the holey slice real quick and add a bit more butter. Now place the unbrowned slice back on the pan. SLOWLY crack the egg into the hole because you don’t want it splashing all over. Place a cover over the top. If you want a sunny side up egg then leave it on there until it’s cooked a little on the side. But if you want it over easy, then flip it over one time until it browns a little. Now remove the holey egg slice and place on a plate.

Next, heat butter on medium heat in the pan again then grab another pan and heat olive oil on medium heat. Place the sliced bread on the pan with butter on low heat until it browns on that side. Now flip it over and add the cheese and cover. In the pan with olive oil, add the kale. You can add seasoning like salt and pepper if you want. I added Lee Kum Kee’s garlic chili sauce. Sautée the kale over medium heat while the cheese melts on the bread. Turn off the heat once the cheese has melted. Add the kale to the cheesy slice. Then put those two slices together and cut it in half. Bam! Enjoy.

If you have any questions or had trouble making this, feel free to email me at sincerelydandy@gmail.com

This site uses Akismet to reduce spam. Learn how your comment data is processed.