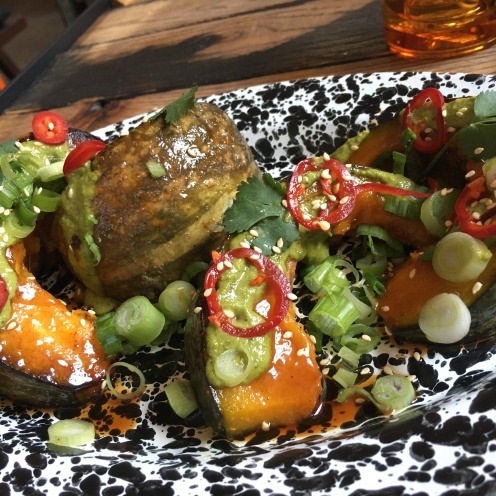 I feel like the westside part of LA has some of the best happy hours in the city. My current westside favorite is A- Frame! EVERYTHING WAS SO GOOD! I mean, you don’t expect anything less than mouth watering at a Roy Choi restaurant right?

The daily special were oysters that came with three dipping sauces. One of them was actually beer and I spent a few minutes trying to figure out what fancy sauce it was LOL. Then got a plate of assorted pickled veggies that was very good with the ranch- like sauce it came with. Pickled cucumbers and ranch sound weird together, but try it!

Of course the chicken wing lover in me had to order the Korean hot wings. It was the perfect blend of traditional and Korean hot wing flavor. It also came with the amazing ranch that literally tasted great with everything. Then I had the poke and the squash. The two types of poke that was available that day was shrimp and a spicy tuna- awesome as always. The squash was probably the best part of the meal! I don’t know what sauce was on it, but it was amazing! It wasn’t too cooked, but wasn’t too raw either. I don’t know how to explain it, but it was great. I’m actually drooling just thinking about it right now.

What’s your favorite happy hour spot on the westside?

This site uses Akismet to reduce spam. Learn how your comment data is processed.